Trinity River Marine produces lumber milled from recycled logs, formerly used to surround and contain log rafts on the Puget Sound in Western Washington. We obtain the logs from local tugboat companies. The holes and tunnels in the logs were bored by teredo clams. Lumber milled from wood formerly inhabited by teredo clams is commonly called “wormwood”, but we call it teredo lumber in honor of the clam that did the work. We have grown to have a lot of respect for that little clam! Read more about how our lives have been impacted by teredo clams in this Pacific NW Magazine article from the July 10, 2016 issue of the Seattle Times. 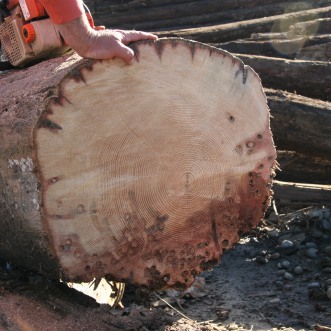 When we first started using teredo lumber, we didn’t see the logs’ hidden beauty,  because we looked only at the outside. Some logs were sold for pulp, while some still go to stream enhancement projects or are used for bulkheads or in landscaping. Eventually though, the thought of milling them was too strong to resist. Like a thunder egg, the bumpy gray logs begged to be opened up to reveal what’s inside. And when we cut off the ends of some of the logs we were impressed with the grain even though there were a lot of holes and tunnels to work around. Actually, it turns out the holes and tunnels make the milled wood interesting and unique.

What we sell is actually new lumber milled from recycled logs. While reclaimed lumber – formerly used in barns, schools, homes, warehouses and other buildings – is becoming more common, the kind of wood we sell is much harder to find. We don’t know of any other business currently milling quantities of Pacific Northwest saltwater lumber affected by clams. Our lumber attracts customers who are committed to recycling and reusing our planet’s natural resources, and those who like unusual and interesting wood. 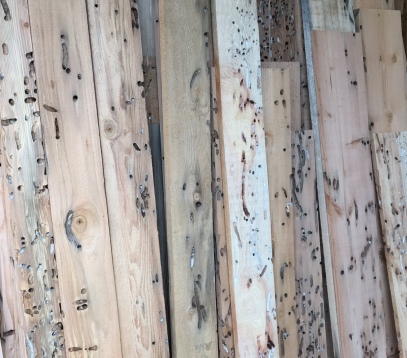 Since 1853 the Pope and Talbot Mill in Port Gamble, Washington produced some of the finest Douglas Fir and Hemlock lumber in the world. For nearly all of its 143 year history, logs arrived in Port Gamble by water, towed by the mill’s own tugboats. Log rafts of 60-90 bundles of logs, surrounded by strings of logs called boomsticks, were joined together end to end and attached by boomchains which ran through a hole drilled in each end of the log. The boomsticks spent most of their 20-50 year working lives in saltwater, and were therefore susceptible to infestation by teredo clams, sometimes called shipworms.

Wood milled from logs inhabited by teredo clams was commonly called wormwood, but these wood-boring animals are actually clams in the bivalve family. The most common teredo clam in the Pacific Northwest is called Bankia setacea, which can be 1/2 inch thick and more than 3 feet long. The two halves of the shell are small, about the size of an adult’s fingernail, and are located at the front end of the animal. Teredos have a membrane thin body, so the wood they bore into provides them with a safe home, and support for their body. The clam enters the wood as a larva, drilling a tiny hole. As it ages, it eats, grows, and drills a burrow through the wood with the razor-sharp front edge of its shell. The teredo spends its entire life protected inside its log burrow, where it may secrete a white, calcium-based lining.  Like most clams, teredos are  filter feeders; they strain plankton from water drawn in through the small opening at the tail end of their burrow.  At the peak of their growing season teredos can bore up to ¾” of wood per day.

Milled teredo lumber is a specialty wood. The logs are mostly old-growth Douglas Fir, some over 500 years old. Some of our lumber shows evidence of heavy teredo activity, while other lumber is only lightly marked. Boards with many holes and tunnels should be used decoratively, rather than structurally. The lumber’s distinctive look is  attractive in homes and cabins, as well as in restaurants, pubs and breweries.  Teredo lumber may also be used to make furniture, bowls and art.

We love the variety of colors found in lumber milled from these recycled logs. Tints of orange and red from the  sawdust that filled the holes and tunnels during milling, and black and dark purple stains from the  metal that was in some of the logs, team up with the natural  features of the Douglas Fir and Hemlock logs to make some unique and interesting boards.

The logs have been out of the salt water between five and ten years  and the clams are long gone. After milling, we remove the sawdust from the clam bores and tunnels, dry the lumber and sell it rough-cut or planed and unfinished. Since it has spent years in salt water it absorbs more moisture than typical lumber and may require extra time to acclimate before being installed. It’s worth the wait!